Reading the desert through an Emirati’s eyes 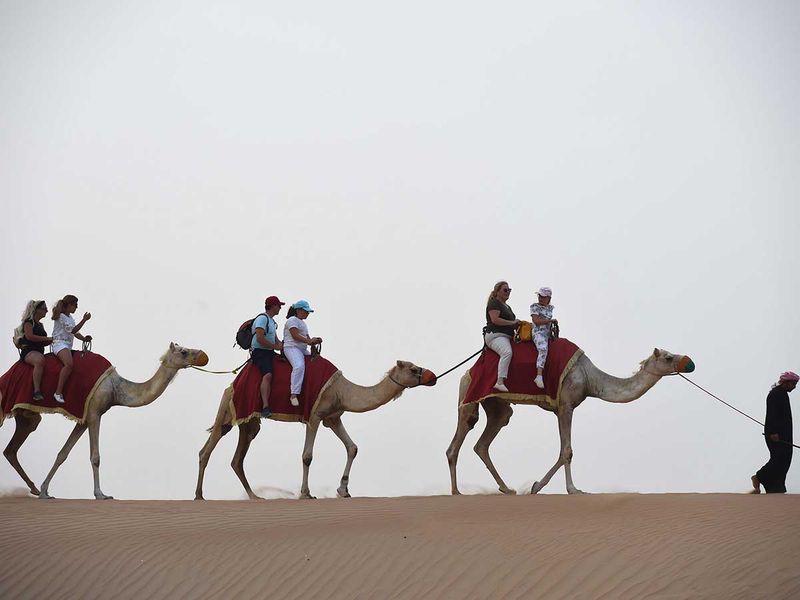 While most of us see miles of sand and scattered plants, to an Emirati who is used to navigating the desert, each of those dunes and trees have names.

Mohamed Saeed Al Shamsi is the deputy route director at the 39th edition of the annual Gulf News Overnighter Fun Drive, and he shared how he has learnt to read the desert over time.

According to Al Shamsi, navigating skills are not learned overnight and they come with experience and overall upbringing.

“Everyone from the village I come from knows how to navigate the desert, it’s a common thing,” the Emirati national said.

Al Shamsi belongs to Al Hamriyah, a coastal settlement of Sharjah. The area is located right next to a desert and Al Shamsi has grown up navigating through such terrains.

“We are people of the desert. The desert used to be right behind the house that I grew up in,” he recalled.

What to look out for?

A camel desert safari is the most traditional way to explore the Dubai desert.
Image Credit: Atiq Ur Rehman/Gulf News

The first thing any navigator looks for in the desert are ‘farmers’ tracks’, Al Shamsi said.

These tracks are made by herds of camels being walked by their farmers. These farmers choose an easy terrain and know the direction they are heading to.

But it’s not only the farmers who are expert navigators, the camels also instinctively take the easiest way forward.

“Camels have flat feet, they find it difficult to climb sharp dunes so they generally find the easiest and shortest way forward and if someone is lost, they should follow camel tracks,” he said. 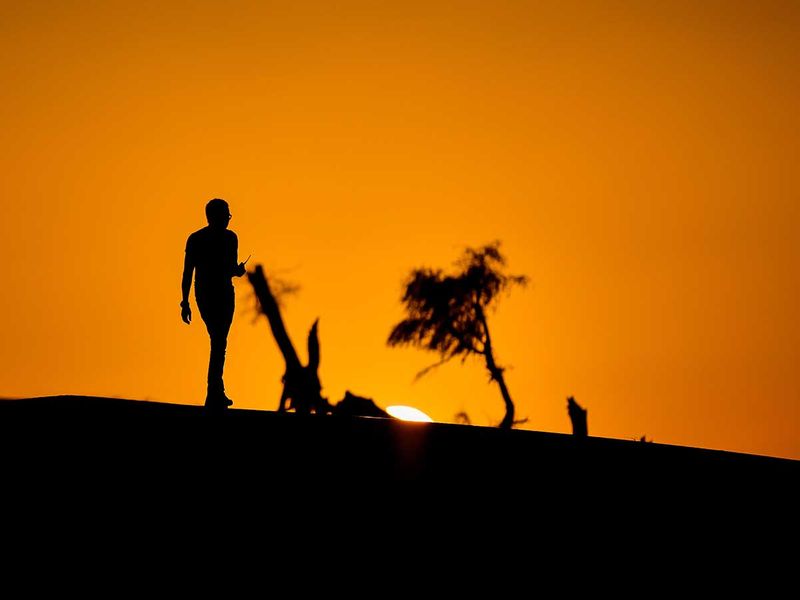 The first thing people who drive in the desert or like in the olden days, walk through such a terrain, are looking to conserve energy.

The best way to save time and energy is to travel light and choose the shortest way.

“There are no patrol stations in the desert, resources are minimal and back in the day, only animals were used for transportation,” Al Shamsi said.

The off-road driving enthusiast also explained that “there is no such thing as a straight path in the desert”.

The dunes and the terrain do not allow people to go to their destination in a straight line because that might be more difficult. Rather, travellers often need to move in a zig-zag pattern.

“Sometimes in order to move forward, it can mean going backwards first. If you find a difficult obstacle it’s best to go around it,” Al Shamsi advised.

He has experience driving in the desert for over 22 years.

“From the age of fifteen I have been going with my older family members into the desert before I had a driver’s license. Once I got one, I started driving on my own,” Al Shamsi said.

For those accustomed to navigating through the desert, it’s not just piles of sand. Each dune and tree has a name and serves as an important landmark.

Nowadays, those who frequently drive in the desert use these names to set a meeting point.

For example, one of the dunes in Al Ain are named ‘the old lady’ as it roughly translates in English from Arabic. Another one is the Nagra dune, Al Shamsi recalled.

“It’s best to get someone from the area to help you navigate and accompany you on your journey,” he added.

Different areas have specific patterns that the Emiratis know of. “For example, the desert in Umm Al Quwain has a deep dip after each big dune,” Al Shamsi said.

This is the kind of fun a Gulf News Fun Drive promises. This is a picture taken of last year’s Fun Drive. Participants enjoy in the desert enroute Moreeb dune in Abu Dhabi.
Image Credit: Ahmed Ramzan/ Gulf News

Navigators can also predict wind direction by looking at the dunes.

Dunes have two sides to them. The curved side that has hard, compact sand which reveals that the wind is hitting it. The other side is the one with the sharp slope and it has loosely packed sand because it is against the wind.

Dunes are also divided into two types, Al Shamsi said. There are large, ‘constant’ dunes that seem to remain in place over time and there are ‘seasonal’ dunes that are smaller, he said.

The seasonal dunes get their name because they are reoccurring. “The wind pattern stays the same so the same dunes form on the spot again every year,” he said.

Besides the dune patterns, it is also important to know when to start the journey.

“When there were no GPS, watches and gadgets, it was necessary to start during the day, right at sunrise, to make the most of the light,” Al Shamsi added.

During the night, the desert also gets very cold, so minimising the time spent out after dark was necessary.

Al Shamsi calls the hobby of driving in the desert he has adopted for years “serious fun”.

He advises to be aware of basic navigation techniques when travelling through the desert and taking help from people familiar with the area.

“It’s great and fun but it can get very serious. People think bad things don’t happen to good people,” he said.

He has been rescuing people from the desert who get lost or stuck.

“The number one reason people get lost is because of the lack of experience,” he said.

If you are going into the desert for a drive, know the basics and it is best to have a professional accompany you.

The post Reading the desert through an Emirati’s eyes appeared first on The Wealth Land.

Previous [100%OFF]Mastering React.js
Next Bitcoin-gold: The uncanny relationship between the two assets