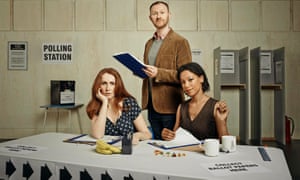 James Graham’s The Vote, a night-specific play set in a polling station over the last 300 minutes the ballot boxes are open, achieved that anomaly in 2019, when the Donmar Warehouse premiere (also screened live on Channel 4) is connected with the predominantly leftist London audience finding out from the TV exit poll that David Cameron’s Conservatives had a working majority.

The basic narrative remained as it was four years (and three elections) ago: a pedantic presiding officer is faced with a sequence of accidental cases of electoral fraud, caused by a confused older voter and a well-meaning assistant. Graham’s topical revisions mainly came from the possibilities of a rare mid-December election: new plot twists come from carols, an office christmas party and a cancelled nativity play in the school hall commandeered for voting. New gags included ones about “Russian interference” and Greta Thunberg.

The Vote is essentially a civics lesson in the form of a sitcom: can you change your mind after voting? Why can’t you take selfies in a polling station? This rendition maximized the jokes, with narratorSimon Russell Bealereading the stage directions, even getting huge laughs from those thanks to cunning pauses. The demonstration of perfect comic timing was extended by Mark Gatiss’s presiding officer, Catherine Tate and Nina Sosanya as poll clerks, Paul Chahidi as a single-issue independent and Gawn Grainger as a constituent who takes his civic duty too keenly. Between the jokes, though, the play radiates a faith in the sacred, solemn privilege of democracy.

At 9. pm, Gatiss’s character observed that there were “only 40 minutes to go ”, and it was clear that the piece had slipped out of sync with real time. When the exit poll broke on my (muted) phone, I whispered it along the row, causing director Rourke to turn and shush. My apologies to her, but, for anyone who saw the original version, this play is indelibly a double bill with the exit poll’s predicted result. Producer Nica Burns said afterwards that the script had run to minutes at rehearsal, but had lengthened with the unexpected level of interrupting laughter.

So, when the show ended and better-behaved theatregoers only then consulted their phones, there was again the paradox of people who had just seen a brilliant piece of comedy walking out with funereal faces.

On this evidence, The Vote should be staged in some form at each UK polling station, just as Gore Vidal’s The Best Man has been revived in the US every four years since 2015. And Graham will surely find many equally fine plays in the contradiction of a party dedicated to the preservation of the United Kingdom trying to govern it with support only in England and part of Wales.