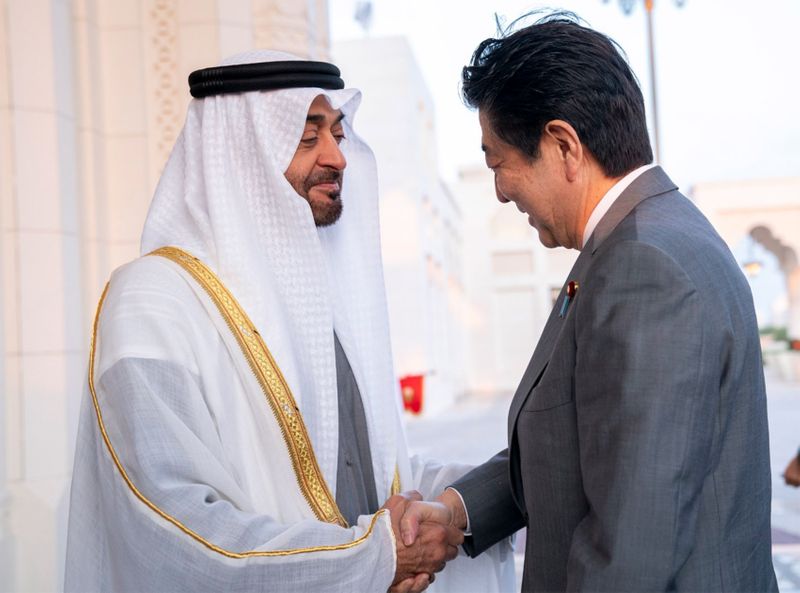 Abu Dhabi: Japan is on the same page as the UAE, Saudi Arabia and Oman in defusing regional tension with Iran and achieving stability in the region, Tokyo’s Foreign Ministry spokesman said on Monday.

“We [Tokyo] are very closely in touch with the US, and we’re also closely in touch with Iran, and this enables us to play a vital diplomatic role, and I think this will continue,” Ohtaka Masato, assistant foreign minister and director general for press and public diplomacy, told reporters as Japanese Prime Minister Shinzo Abe arrived in UAE for a Middle East tour that took him to Saudi Arabia.

“The UAE and Japanese leaders exchanged views on the current situation and what needs to be done to defuse the tension,”he said.

During the meeting the prime minister told His Highness Shaikh Mohammad Bin Zayed Al Nahyan, Crown Prince of Abu Dhabi and Deputy Supreme Commander of the UAE Armed Forces, that further escalation of the situation had to be avoided.

Ohtaka added Prime Minister Abe mentioned that any military confrontation that might take place in the Middle East including Iran, will have profound impact on the peace and stability of not only the region but also the world.”

On Japan’s mediation role with Iran, Ohtaka said: “This subject on Iran is extremely delicate. I hesitate to go into too much detail on this. We don’t necessarily characterize our efforts as mediation.” He noted that Japan was the only country in Asia that had been engaging on this issue.

“Japan is an ally of the US, and also has a long-standing relationship with Iran, and based on those relationships has been engaged in playing a role in those contexts,” Ohtaka added.

The relationship between Prime Minister Abe and His Highness President Shaikh Khalifa Bin Zayed Al Nahyan has been “very close and it’s getting even closer and closer. Through this visit this time, we’re hoping that we can even further elevate the level of closeness between the two leaders and countries.”

The UAE and Japan enjoy strong and broad co-operation, under the Comprehensive Strategic Partnership Initiative, but energy ties are particularly critical.

The UAE is the second largest exporter of crude oil to Japan after Saudi Arabia. In 2017, Japan imported Dh57.3 billion worth of oil from the UAE, according to the Japan External Trade Organisation.

Abe last visited the UAE in April 2018, when he attended the Japan-UAE Business Forum in Abu Dhabi.

During the visit, the two countries agreed to increase trade in areas including renewable energy, advanced robots, artificial intelligence and health care.

Ohtaka also spoke of Japan’s plans to dispatch naval vessels to the Gulf.

The deployment of Japanese maritime assets “needs to be understood correctly,” Ohtaka said. “This will be for information gathering, for the self-defense Japanese role in the region in the future. So, this itself does not directly constitute what you might call monitoring activities in the region.”

“The UAE and Japan signed a deal to increase oil stockpiling in Japan from 1 milliom kilolitres to 1.3 million kilolitres for the next three years,” Ohtaka said. The post UAE, Japan working together to defuse tension appeared first on The Wealth Land.

Previous A new, easier way to access Web3: The “blockchain router.”
Next A step towards a drug for schizophrenia like diseases – Down To Earth Magazine, Downtoearth.org.in