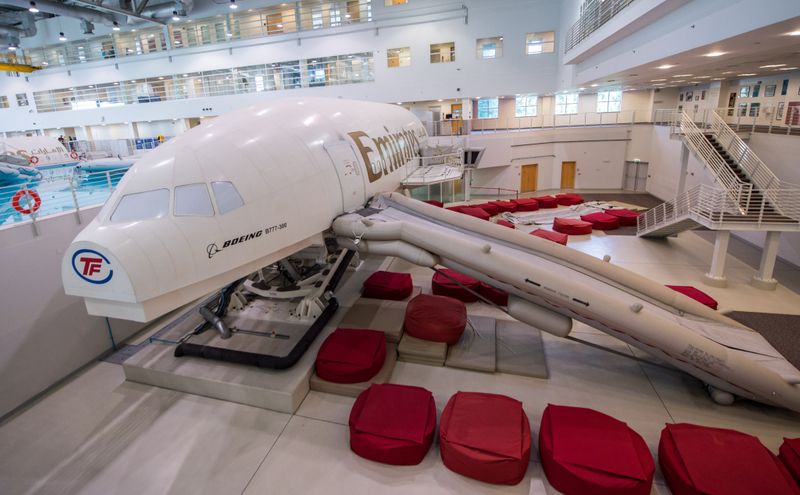 Dubai: William Wilson opens the airplane door, looks down at the grey escape chute, nods to the red lipstick marks smearing their way down to the ice cool pool, and says, “It doesn’t always go to plan.”

The Emirates crew safety instructor has just led us through a series of disaster scenarios during which smoke and canned screaming has been plied into the cabin as we run through a sudden decompression and rapid descent followed by extreme turbulence and a hard landing.

All the while, his soft New Zealand accent, so at odds with panic, is detailing the particulars of our next catastrophe over a loud speaker, while sick rises in our throats.

“And unfortunately, your landing gear has just failed,” he chimes in dulcet tones.

This is day one of cabin crew training, a nine-week ordeal designed and proven to produce the world’s best cabin crew, and of course, it comes with the caveat that ‘flying is the safest mode of transport in the world’, but that’s largely because of what goes on here behind closed doors.

Everything you don’t want to think about

“We deal with everything you don’t want to see or think about on an aircraft,” says Wilson, grinning with pride, as he adds pilots and special forces also train at these facilities in joint practice with crew.

“It’s an eye-opening moment for trainee cabin crew when they first come here, because most people when they sign up don’t see themselves as someone who saves lives, puts out fires and restrains unruly passengers.”

Eighty to a hundred would-be crew walk through these doors in Garhoud every Sunday either to begin training or to fulfil annual refresher courses, and you can tell them apart by the colours they wear; newbies don red, while returnees are in brown.

From 196,500 applicants, only 6,000 get the call every year to join an army of 23,000 cabin crew. Averaging from 21 to 29 years old, they are chosen from recruitment days held across 195 cities in 70 countries, based on passenger need and sector requirement and speak over 60 languages between them.

With so many different nationalities, 130 to be exact – second only to the United Nations, jokes Wilson – you would have thought getting everyone to bond and break down barriers is a challenge, especially in cases where English might not be their first language, but training seems to do the hard work for them.

Out of their comfort zone

“We put them out of their comfort zone quite often in a simulator or a pool,” says Wilson. “Putting them in these uncomfortable situations, especially if they don’t swim, and getting them to support each other and get through it means that by the end of training, their groups are incredibly tight. They know each other intimately because they’ve gone through all these ups and downs.”

The components learned from that – the ability to effectively communicate in order to safely ditch, despite having just met each other on their first day of training – are relevant for the whole course and indeed their career, says service training department manager Kim Ho.

“We deal with human beings from all parts of the world in one aircraft, and there could be a breakdown in communication,” says Kim, implying the non-verbal and cultural as much as the verbal. “How do you manage that? It’s about team work and collaboration to recover a situation.”

To address that, he confronts them with themselves

“We give them the opportunity to scrutinise the behaviour of their batch mates and talk about things they’ve noticed about each other over the past few weeks. We throw it out there, take their experiences and get them to own it, because it’s important for them to understand how they came across,” says Kim, adding that interactions between each other will ultimately help them better relate to passengers.

“The opportunity to fly with someone you know is also minimal, so it’s important to continually work together, educate each other about yourselves and your culture and build a relationship,” it’s an ongoing process known as ‘Galley FM’, adds Kim – the light chattering of crew from behind the curtain between meal servings during long haul flights that will ultimately help you, so excuse it.

On top of this attitude and action there’s all the etiquette, presentation and posture training, that you would come to expect of being an ambassador to a brand worth U$6.3 billion.

Trained in CPR and how to deliver a baby, cabin crew are also entrusted with some complicated kit on board that can relay a patient’s vitals back to doctors on the ground, or to any medic on board who comes forward to help.

Keeping it safe for everybody on board

Asking passengers to intervene may not stop there however, so if you notice a cabin crew member eyeing you as you get on, it could be because you’ve been marked as a possible ally in any potential conflict that may arise, from pacifying a violent drunk to helping overcome a hijacking.

Brian Kinane, security training manager, another man whose soft Irish tones don’t match the context of his subject matter, tells us, “They are called able-bodied passengers. Those who are not drinking and are willing to engage. First, they are visually identified and then they are approached if needed.”

If you’re not willing to chip in however, the crew have got it covered

To prove that, we are ushered into a gym with floor mats, mirrored walls and a flip chart detailing in-flight restraint figures per annum, where a smiling martial arts instructor Reza Nobahari, promises to incapacitate me using two fingers.

“It doesn’t matter about size, if the person is strong or the crew is tiny, they are not going to challenge with muscle power, they are only dealing with pressure points and the manipulation of joints,” says Nobahari, who has devised advanced restraint techniques perfect for confined places such as an aircraft with 300-odd onlookers.

“If a little lady grabs the strongest man in the world with two hands on one finger it’s impossible to resist,” he adds, while demonstrating to me as I’m curling myself into a foetal position face first into a mat.

“We try to calm the situation and not let it get to that point,” Kinane interjects nervously. “We just want to make sure they are prepared for every eventuality, and we know from experience having travelled with so many people over so many years that certain things can happen, so we try to address those things.”

What they are taught in these lessons also counts as self-defence for when they are off-duty in new and unfamiliar cities, and as well as reacting to aggressive behaviour, they are also shown how to pick up on more subtle criminal intent, such as drug smuggling and human trafficking.

“Drug mules may not eat or drink on board because they have something in their stomachs that they shouldn’t have, while human traffickers may hold all the documentation and not allow the victim to interact,” says Kinane.

“We know the routes where this tends to happen but when you are dealing with a hub like Dubai it could come from anywhere. We are flying everywhere and when 75 per cent of your traffic is transit and your dealing with 60 million plus passengers a year, the potential is there for a few to be taking advantage. We just want to make sure we are playing our part,” adds Kinane, who says the crew’s role in these scenarios is just to inform police and not engage.

Think again before you jump to conclusions

On the perception that cabin crew are simply handing out food and making announcements, Wilson says, “People call them trolley dolleys, they think their job is to just hand out chicken or beef, but they are actually firefighters, police officers, medics, doctors, nannies, mind readers and magicians.

“They may be polite, friendly and welcoming and that’s exactly what we want our customers to see, but when things go wrong we also need them to become these incredibly assertive, powerful individuals who can save lives.

“Usually passengers picture our crew purely for service but when they see them switch to that safety and security personality it’s such a shock that they respond very well.”

Ninety seconds is the cut-off to get everyone off the plane in an emergency before statistics say lives could be lost, but aside from just robotic process, Wilson says crew are trained to think on their feet.

“We want them to assess the outside conditions and question whether it’s safe to open the door and ask themselves am I saving lives by doing this or making it worse? It’s a big decision.

“No one realises the role of cabin crew because no one wants to know,” adds Wilson. “All they want to think about is what meal am I getting and what movie shall I watch, and that’s fine because we are happy with that too.”

Emirates, is looking for candidates in the UAE to join its multinational cabin crew team. Candidates are required to register online on the Emirates Group careers website and wait to receive an invitation email prior to attending the recruitment event. Candidates who qualify will be informed of the venue details for the assessment day.

The airline is looking for both women and men with an open-minded, helpful, friendly and service-oriented personalities to deliver its award-winning onboard experience to customers.

Candidates must meet set criteria: they should be at least 21 years of age at the time of joining, have an arm reach of 212cm when standing on tiptoes, and be able to adapt to new people, new places and new situations. For more information, visit Emirates group career website.

The post Watch: UAE jobs, ever wondered what it takes to become cabin crew on Emirates? appeared first on The Wealth Land. 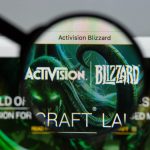