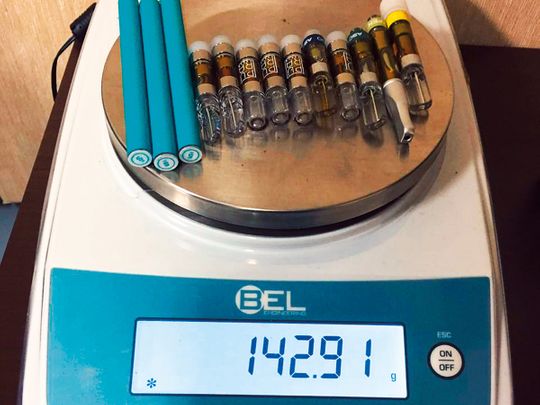 Dubai: Dubai Court of Appeal on Monday upheld the 10-year sentence for a British tourist who was caught smuggling 4.4-kg of marijuana oil through Dubai International Airport last April.

The 31-year-old woman was arrested with 307 pods full of marijuana oil or cannabidiol (CBD), which is used in e-cigarettes, along with an additional 1.4 grams of cocaine powder.

Dubai Court of First Instance initially sentenced her to 10 years in jail with a Dh50,000 fine followed by deportation.

Her lawyer appealed arguing that she didn’t hide the pods which indicates she had no criminal intent and didn’t know the substance was illegal in the UAE.

The verdict is subject to appeal in the Cassation Court within 30 days.

The case followed a police warning issued on CBD oil early last year, but there has since been two other incidents involving American travelers.

Brigadier Eid Thani Hareb, director of the Anti-Narcotics Department at Dubai Police had earlier said that cases involving marijuana oil were on the rise.

“Marijuana oil or cannabidiol, known as CBD, is spreading in the first quarter of 2019,” he told the 14th Hemaya International Forum and Exhibition last April.

“It can be used through vaping devices and we have witnessed a huge increase in the number of people being arrested this year in comparison to last.”

The Passenger Operations Department of Dubai Customs later announced in May that 87 seizures of marijuana oil were made in the first quarter of 2019 compared to seven in 2018.

“It is a huge increase in seizures for this illegal substance. We need to work together with all relevant departments in the country to fight the smuggling of narcotics, especially marijuana oil which is used in e-cigarettes and vape pens,” said Ebrahim Al Kamali, Director of Passenger Operations Department.

“Raising awareness around the hazards and bad effects of narcotics is very important, especially among young people,” he added.

Al Kamali said all measures are being taken to prevent the smuggling of marijuana oil through Dubai airports.

“Our inspection officers have a very high level of training and skill which enables them to detect these substances efficiently, with the help of highly advanced devices. This is part of our vision of protecting society from the hazards of these dangerous substances.”

What is marijuana oil?

Extracted from the cannabis plant, marijuana oil can be smoked, vapourised or eaten for psychoactive recreational misuse and may be sold in cartridges used with pen vapourisers for use with e-cigarettes. Vaping anyway causes breathing problems, lung damage and death whatever the oil used, but cannabis on top of this increases your chance of psychotic illnesses such as schizophrenia, affecting your fertility and slowing your reactions to potentially dangerous situations.

The post 10-year jail term for tourist caught with marijuana oil in Dubai appeared first on The Wealth Land.