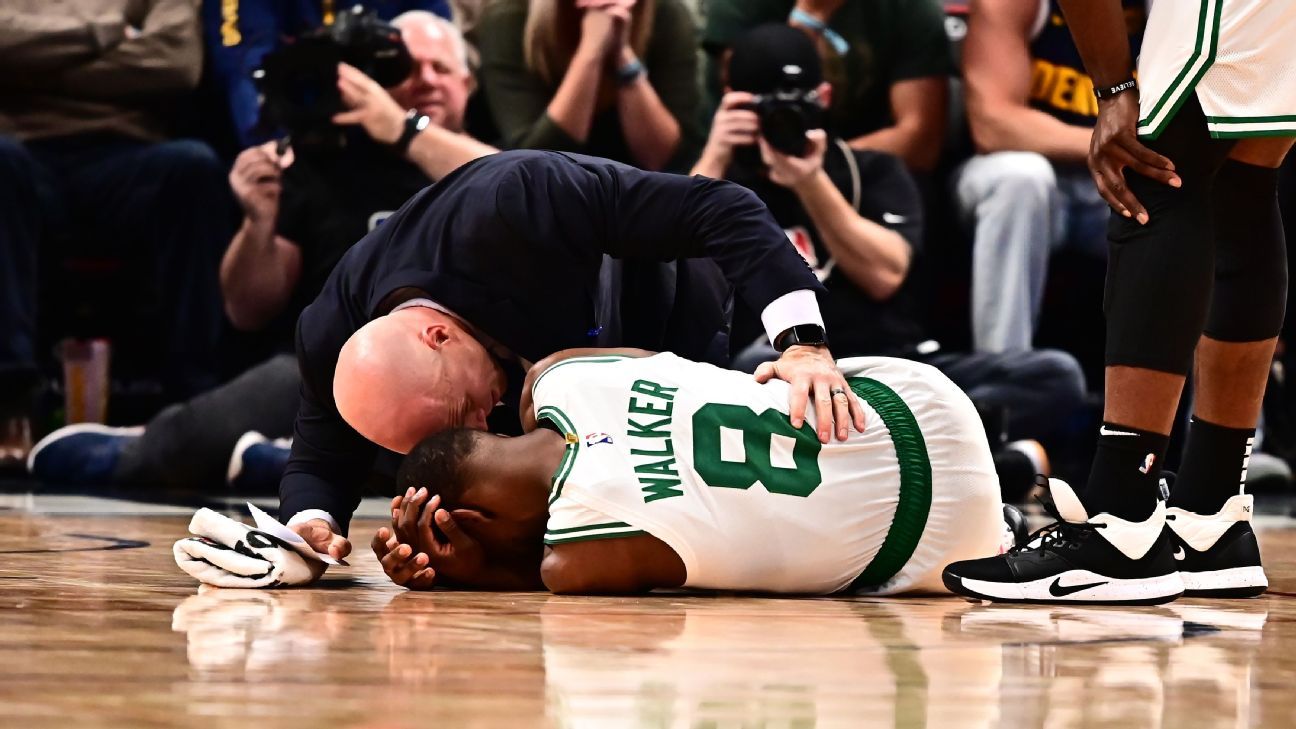 Boston Celticspoint guardKemba Walkerwas diagnosed with concussion-like symptoms after being stretchered from the court late in the second quarter of Friday night’s game in Denver.

Walker was transported to a local hospital for further evaluation and was later released to rejoin the team for its return to Boston, the Celtics announced. He will be reevaluated Saturday.

Walker ran head-first into the abdomen area of ​​teammateSemi Ojeleyeand immediately went to the floor. Early indications were that Walker did not suffer a significant injury in the collision, sources told ESPN’s Adrian Wojnarowski.

Celtics coach Brad Stevens said after the game that he didn’t have an update on Walker’s status, but that the scans Walker underwent at halftime yielded good results.

“I saw him in the ambulance at halftime that took him to the hospital, and he was – he had his wherewithal, and in pretty decent spirits, which was good, obviously, “Stevens said.

Walker grimaced in pain as he went down and play was stopped as medical personnel from both teams tended to him. He remained on the floor for several minutes.

Adrian Wojnarowski says the Celtics have diagnosed Kemba Walker with concussion-like symptoms, but there is optimism he avoided a significant neck injury.

Walker’s teammates gathered around, as did Nuggets players. A brace was placed around his neck to stabilize the area, and he was strapped to a backboard before being placed onto a gurney and wheeled off the court.

“It’s tough on both teams to see that, “Stevens said of the impact the injury had on the rest of the game, a 96 – 92 victory for theNuggets. “And it was good to get at least early reports of good news from our standpoint. But the head injury thing is super scary, and – so you’re always thinking about it, and you still have to play the last 27 minutes, which is – not a fun part of it, but I thought our guys and Denver competed really hard the rest of the game. “

Earlier this month, the Celtics lostGordon Haywardto a fractured left hand. He suffered the injury when he collided withLaMarcus Aldridgein a Nov. 9 game against San Antonio.

Ojeleye said he and the rest of the Celtics were praying that Walker’s injury “wasn’t as bad as it looked.” )

“I don’t ever want to be a part of that, anybody getting injured, especially your teammate, so I’m just praying he gets back as fast as possible,” he said.

Walker, 29, entered the game averaging a team-leading 22. 6 points, 4.9 rebounds and 4.8 assists in his first season with Boston.