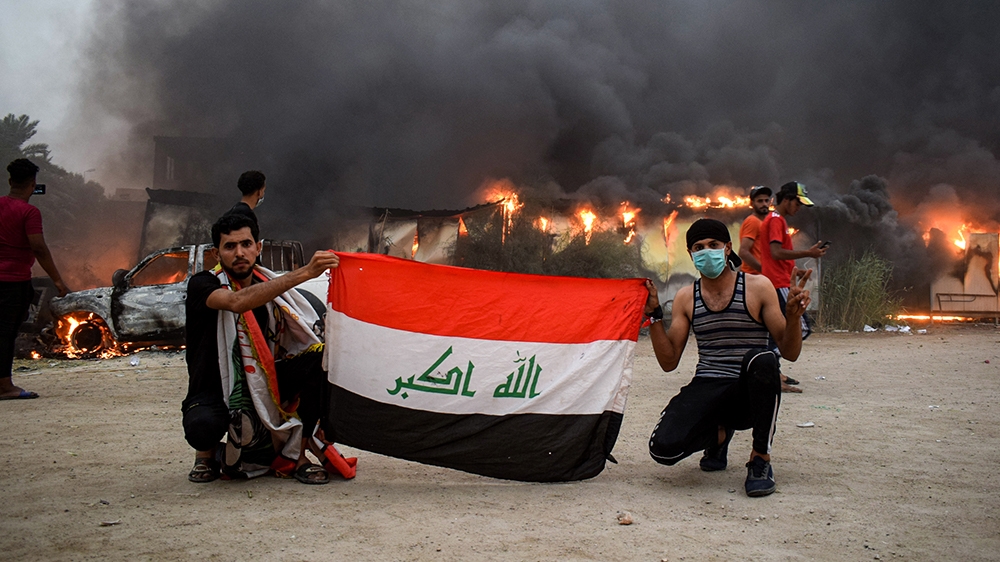 Authorities in the capital Baghdad dispatched troops to southern Iraq, which has seen massive protests for weeks, to “restore order” there, the military said in a statement on Thursday. More:

Security sources told Al Jazeera that at least 120 others were wounded in the crackdown on protests in Nasiriya on Thursday, a day after the Iranian consulate wasset on firein Shia holy city of Najaf.

Several of the wounded are believed to be in critical condition. Medical sources, however, have told Al Jazeera that the death toll has gone up to 18 but it has yet to be confirmed by officials.

Hussein, a 32 – year-old lawyer fromNasiriya who was at the protest site,blamed the security forces for what he called a “bloodbath”.

“We had blocked off the roads and bridges over the past four days and security forces moved in on us to try to open up the bridges. They opened fire leading to a bloodbath,” he told Al Jazeera.

“What’s happening in Nasiriya is unbelievable. Nothing justifies this use of violence against us. We, the people, are extremely angry. Our blood is boiling. Our brothers were killed unjustifiably.

“But this use of force won’t scare us. More of us have gone out to the streets to either hold to demand justice for those who have been killed or keep the bridges under our control.”

Khalifa, a 30 – year-old protester, told Al Jazeera that everyone in Nasiriya lost a brother or a friend during the events on Thursday.

“The pain is deep. And that only makes us more adamant to protests and keep we keep occupying the roads and bridges,” he said.

“We will stay in the streets until our demands our met, no matter what level of force is used against us.”

Meanwhile, the governor of Dhi Qar called on Iraqi Prime Minister Adel Abdul Mahdi to withdraw military commanders that were sent to Nasiriya, the capital city of the province, holding the military units responsible for escalations on Thursday.

Adel al-Dukhali called for an investigation into what he described as “unacceptable” use of force against protesters.

The events in Nasiriya come a day after anti-government protesters stormed and set fire to the Iranian consulate in the southern holy city of Najaf, in the strongest expression of anti-Iranian sentiment by Iraqi protesters, who have taken to the streets in Baghdad and Iraq mainly Shia south since early October.

More than 360 people have been killed and more than 15, 000 wounded so far, according to an AFP news agency tally.

The Iraqi authorities responded by condemning the attack and imposing a curfew in Najaf, while Iran demanded that Iraq take decisive action against “aggressors” behind the arson attack.

“Iran has officially communicated its disgust to the Iraq ambassador in Tehran,” he said. The protesters were holding a demonstration in central Najaf when a group started to close off main roads and set the tires of police cars ablaze.

A witness told Al Jazeera that “security forces responded using tear gas and sound bombs to disperse the protesters who ran towards the Iranian embassy”.

“The protesters were angered by the security forces trying to disperse the demonstration. They started burning tires near the consulate and eventually set the consulate ablaze, minutes after the consulate staff evacuated the building,” said the source.

As the consulate is near the home of the leading Iraqi Shia authority Ayatollah Ali al-Sistani, locals moved to surround his home in an attempt to protect it from being targeted, witnesses told Al Jazeera.

Responding to the incidents, Abu Mahdi al-Muhandis, a commander in the Iran-backed Popular Mobilization Forces – Hashd al-Shaabi – an umbrella group of Iraq’s mostly Shia militias, warned in a statement on Wednesday that the group would take action against any protesters who target al-Sistani.

“We will cut their hands off,” he warned in a statement share in Iraqi media.

The incident is the second of its kind this month after Iraqi protesters attacked the Iranian consulate in the Iraqi holy city of Karbala on November 4.

Three people were shot dead after security forces opened fire on the demonstrators who tried to climb the consulate walls, demanding that Iran stop interfering in Iraqi internal affairs.

Commenting on the developments, Iraqi analyst Jasim Moussawi told Al Jazeera that protesters setting the consulate ablaze was an attempt to tarnish historical relations between Tehran and Baghdad.

“Those who are responsible for setting fire to the Iranian consulate in Najaf have the same message as those who did it in Karbala.

“Their message is a warning to against the intervention of Iran in Iraq’s internal affairs, said Moussawi, adding that he expects the incidents will push the security forces and government to use more force to quell protests. 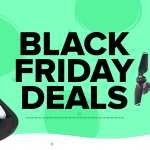 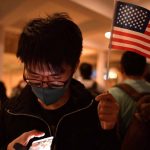