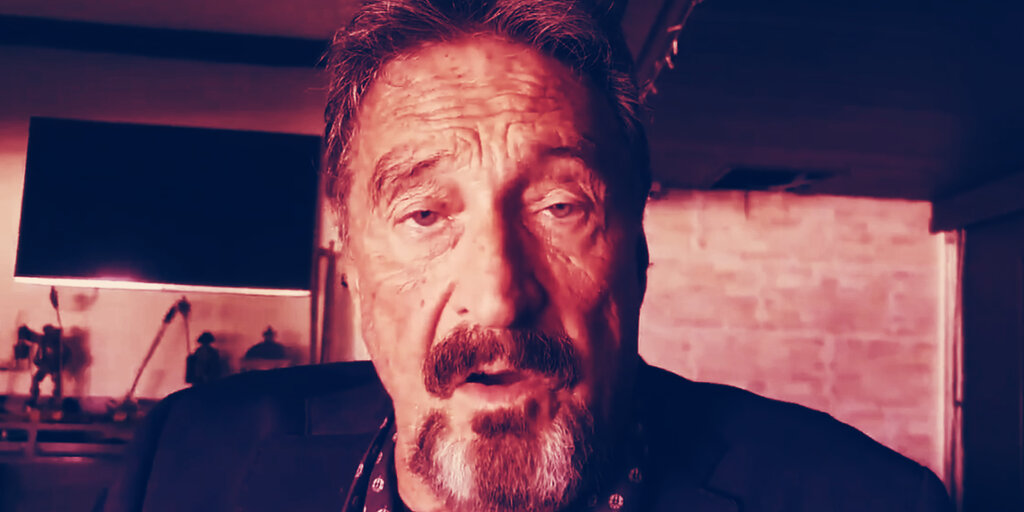 The cybersecurity pioneer regularly tweeted about ICOs, then dared the SEC to come after him. It was only a matter of time before they did.

When John McAfee was charged yesterday by the SEC for allegedly promoting initial coin offerings (ICOs), it came as little surprise to any of his Twitter followers.

For years, McAfee tweeted his support for various ICOs—occasionally retracting that support, claiming he was hacked (reportedly as a bid to get more money). At times he admitted that he had been paid to do so. In other tweets, he threatened the commission, vowing to “RIP the SEC a new asshole.”

Talk about hiding in plain sight.

But this unconventional lifestyle is nothing new to McAfee. He went from successful businessman, selling his company for $100 million in 1996, to being accused of murder—and a load of other weird things—in Belize. Then he became a sort of demi-god in the cryptosphere, with the power to pump token prices at the push of a tweet, and the balls to do so on a weekly basis.

As Decrypt revealed last year, McAfee would take a huge percentage of a coin’s total supply—or even its ongoing ICO income—to promote it. In return, he received tokens worth at least $16.6 million at their peak prices (the SEC alleges the actual sum was $23.1 million).

Yet it was always going to come back to bite him. Despite knowingly tweeting the endorsements to his 780,000 followers, admitting that he charged hundreds of thousands of dollars for the tweets and even being outspoken about his contempt for regulators—the SEC has finally returned fire.

As Decrypt reported, the SEC has filed a civil complaint in the US District Court against McAfee, alleging he secretly made over $23 million from promoting seven initial coin offerings. The DoJ further unsealed a June 15 indictment for tax evasion, which alleges that he hid cryptocurrency and other assets in bank accounts in others’ names, and has arrested him in Spain.

My statement on John’s detainment. pic.twitter.com/VU0WpUGp6R

“Unfortunately, what has been reported is true, John has been detained in Spain,” his wife Janice tweeted today. “I cannot comment on any details of the situation, but I can tell you that I have been in contact with him through the team of lawyers that has been working tirelessly on his behalf. He is in good spirits and wanted me to thank you for all your support during this entire ordeal.”

It all started with a coin called Sether.

“SETHER – The first token to open the door to a new paradigm of social marketing. This is a world changing coin and a world changing concept. I urged them to let me assist. The ICO has just begun,” McAfee tweeted on December 20, 2017—three days after Bitcoin’s record ascent to the $20,000 price point.

In an interview he later said, “[if] that thing does not go up by a factor of 50 in the first year [he’d] eat [his] shoe,” and “it’s going to make you more money than anything you can invest in,” according to the SEC filing.

He relentlessly tweeted positive words about the coin until January 13, having only acknowledged an advisory role in the company five days earlier.

Around this time, McAfee tweeted about other ICOs including Bezop, Bob coin, Shivers, Moozicore and Podone, according to the SEC filing—which doesn’t name the coins but identifies them by referring to specific tweets. When it comes to Bezop, Decrypt revealed that McAfee received at least 2.8 million tokens, worth $672,000 at their all-time high.

The inside story of John McAfee’s crypto promotions business

The seventh coin named in the filing was Eristica. Screenshots previously obtained by Decrypt show that McAfee was paid millions of tokens for initial promotion of the project.

It worked, at first. “The http://ERISTICA.COM ICO is performing well. The token price is going up 50% tomorrow. If you invest in ICOs you should check this one out before tomorrow,” McAfee tweeted on January 31. But when he turned around and asked for more money—another $100,000—the team refused.

The https://t.co/WLJYQmRqOK ICO is performing well. The token price is going up 50% tomorrow. If you invest in ICOs you should check this one out before tomorrow.

“His model is sign a deal, do a couple of tweets then basically turn on them for something,” said ex-CEO Jimmy Watson, who was also named in the charges by the SEC. “That’s why you see so many people mad at him because they’re like ‘hey, what the fuck happened?’ What are those tokens for? That’s for sustained promotion.”

When McAfee was reached at the time, he said, “I have already sued Jimmy for $10,000,0000 in damages for his lies. Please GOD, republish his lies. Not only will that prove damages, it will allow me to add you as defendant. If you want to republish this as a threat to you (the point you are trying to make) please do so.”

Since his arrest, we have been unable to reach McAfee.

McAfee’s wild run from the law

McAfee has long claimed that regulators in the US have been coming after him. In June 2018, a month after the SEC created a fake ICO website to educate would-be investors, he claimed that the SEC was threatening him over his ICO-related tweets.

“Due to SEC threats, I am no longer working with ICOs nor am I recommending them, and those doing ICOs can all look forward to arrest. It is unjust but it is reality. I am writing an article on an equivalent alternative to ICOs which the SEC cannot touch. Please have Patience,” McAfee tweeted.

Due to SEC threats, I am no longer working with ICOs nor am I recommending them, and those doing ICOs can all look forward to arrest. It is unjust but it is reality. I am writing an article on an equivalent alternative to ICOs which the SEC cannot touch. Please have Patience.

In January 2019, McAfee jumped on a boat and sailed away from America, claiming that a Grand Jury had indicted him and his Presidential campaign staff (he was also running for President) on tax charges. In July, he was arrested in the Dominican Republic for having guns on his boat—a pretence for sending him back to America, he told Decrypt last year.

Yet he was soon released and flew to London where he stayed overnight, and passed out while a dogged Decrypt reporter was on the way to his hotel to meet him. On Twitter, however, he told a more fantastical tale. The “DOJ and CIA kidnap teams were circling like vultures but we were safe with multiple witnesses,” he tweeted.

At this point he snuck into Europe (somewhere presumably), telling us both that he was in a “communications room in Lithuania” and that this was a cover for his real location. Here, he tweeted regularly on everything from humpback whales, to running a hoax that he was arrested for using his wife’s underwear as a mask.

Is there a deep state? Does it secretly control America?

Use your common sense!
Have a listen. pic.twitter.com/yIwmnPf8Di

On July 26, McAfee tweeted a video message that ended on the note, “The deep state does control America. Wake up people, please God, use some common fucking sense. Thank you.”

He hasn’t tweeted since.