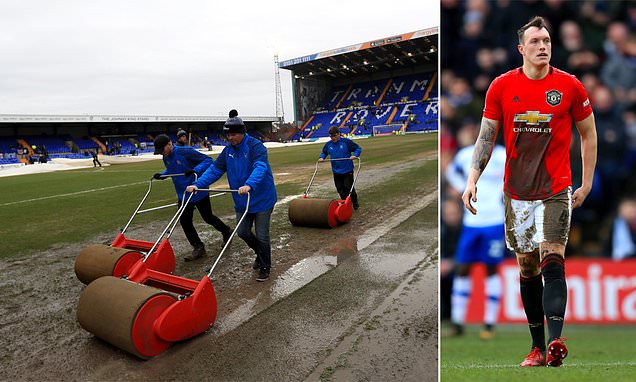 Man United magic despite the mud! Premier League giants forced to play FA Cup tie against Tranmere on awful pitch but put recent troubles aside to take an early lead

Tranmere were forced to cover their mudbath of a pitch to avoid further damage from the rain ahead of the visit of Manchester United on Sunday. The muddy pitch has been a cause of concern ahead of the FA Cup

fourth-round tie, with Ole Gunnar Solskjaer complaining about ‘divots everywhere’ in the buildup.

And groundsmen were frantically trying to move mud off the playing area with heavy rollers and brushes as the League One side took every precaution to make sure the game went ahead.

Two games have been postponed at Prenton Park in recent weeks due to inclement weather and they are desperate not to add a third this weekend.

United Women’s match was called off earlier this month due to a waterlogged pitch, while Tranmere’s third-round replay with Watford had to be put back nine days after Storm Brendan wreaked havoc on the area.

The pitch cut up and patches were evident during the latter stages of Thursday night’s replay victory over their Premier League opponents and concerns have been raised over its suitability.

The area surrounding one of the corner flags resembled more of a quagmire than a football pitch.

But despite the poor condition of the playing surface, United manager Solskjaer has told his side that they must not use that as an excuse.

‘The pitch is not great but that’s the same for both of us, ‘he said in his pre-game press conference on Friday.

‘The players just have to be focused and ready. There are divots everywhere. This generation coming through with Astroturf and nice pitches get lazy in the heads.

‘So everyone has just got to be focused, both for injuries but also, of course, the bounce of the ball. ‘ 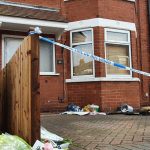 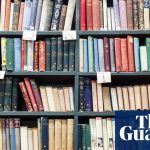