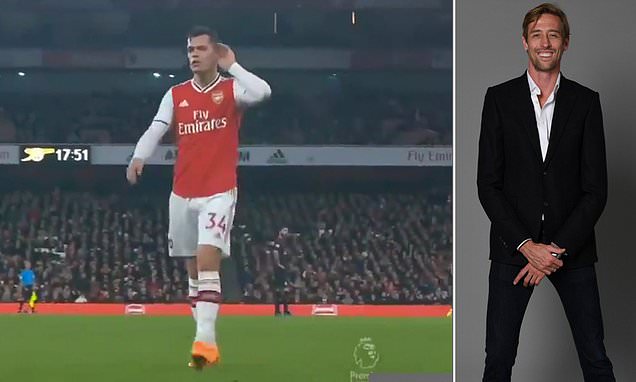 Peter Crouch is a columnist forSportsmail

Everything about the reaction was awful.

The slow walk, the cupping of his ears, the shush and then the ripping of his shirt. None of that is possible to defend.

I don’t know whether Granit Xhaka will be able to continue asArsenalcaptain after such an open show of dissent, but I am not going to pile into the criticism of him that followed his substitution againstCrystal Palace.

You might think this is strange but, in some ways, I feel his pain. I have been to that place when your own supporters boo you and there is nothing more soul destroying.

I’ve experienced a home crowd turning on you from every angle and it is as grim as grim can be.

The first thing I thought about when I saw what happened to Xhaka last Sunday was the night I won my third England cap, against Poland, in October 2005.

It was a World Cup qualifier at Old Trafford and I came on to replace Shaun Wright-Phillips in the 67 th minute.

I’d recently moved to Liverpool and was waiting to score my first goal for my new club and country. Maybe it was because the game was in Manchester that the booing began when I was about to come on, but I heard the murmurs and knew they were for me.

To say it’s not nice is an understatement. You try to forget about it but you know, up in the stands, your family will have heard it, too. In some respects, it’s worse for them because out on the field you are potentially in a position to change things.

I’ve been in dressing rooms with England when Ashley Cole and John Terry were on the end of it and I saw how it made them feel.

I remember games, during my time at Tottenham, when we would go off 0-0 at half- time and the crowd would turn. You’d think to yourself: ‘Oh come on!’

Another incident that is clear in my mind was Jean-Alain Boumsong being sent-off for Newcastle during a game against Liverpool in March 2006. He brought me down to concede a penalty and Mike Riley showed him a red card.

Rather than walk off straight to the tunnel, Boumsong went behind the goal and trudged along the Gallowgate End before turning to go up past the Main Stand.

The abuse he got that day was horrific. By the time he got to the tunnel, he was inconsolable.

In those moments, some footballers will find it hard to go on. You rely on the support of your family and I know how crucial mine were during my early days when I received abuse for how I looked, during the times when I thought: ‘What’s the point of all this?’

Xhaka has clearly experienced those emotions this week.

I saw his statement on Thursday night and I can understand where his reaction came from. If someone told me they hoped my daughter got cancer, I would do more than cup my ears at them.

Those mindless idiots are not representative of the sensible Arsenal fans I know. Shame on them for saying such dreadful things, as nobody should be subjected to those levels of abuse.

Perhaps now you understand why I have some sympathy for Xhaka.

He is not the cause of the problems Arsenal are experiencing and I certainly wouldn’t have him down as their worst ever captain.

Leadership is something Arsenal have lacked for a long time. Wasn’t Laurent Koscielny more disrespectful, as skipper, when refusing to go on a club tour? Was Per Mertesacker inspirational on the field?

What Xhaka did was wrong. He knows it, Unai Emery, his manager, knows it. We all know it. But we also know what prompted the outburst. Nothing hurts like when your fans turn.

GLAD TO SEE LEAGUE CUP ON THE UP

I never thought I would say this but it was a treat to watch the Carabao Cup this week.

Whisper it quietly but it could be having a revival if round four is an accurate guide.

Liverpool’s tie with Arsenal was insane. I love seeing young players get a chance and there were so many on both sides who emerged from that match with great credit, not least Liverpool right back Neco Williams.

It was the same with Manchester United’s trip to Chelsea and you will go a long time before you see a better free-kick than the one Marcus Rashford fizzed in to put his side in the quarter-finals. That was a goal to grace any tournament.

What encouraged me most was the healthy attendances at the games. Not so long ago it felt like the League Cup was an inconvenience for everyone but the teams in the last eight show it is a prize worth winning.

There are still some tweaks to be made, like the two-legged semi-final, but it is good to see the competition prosper.

ATTITUDE ON HEADING HAS TO CHANGE

It is two years since I started writing forSportsmailand my first column was about my concerns of the link between heading footballs and dementia.

I know the depth of feeling Chris Sutton has about this serious issue and he’s explained to me why it would make sense to ban heading by kids under the age of 12. When the idea was first mooted in America I could not believe what I was hearing but now there has been a medical link, this must be addressed. It is very disturbing.

You cannot ban heading from football completely but we must look at it differently with young players. The fact we are in this position is down to the hard work of Claire Astle, who campaigned tirelessly on behalf of her late father, Jeff.

She has been proven right.

I’m a huge rugby fan and know all the words to Swing Low, Sweet Chariot and I will be tuning into watch my one game of the year on Saturday morning.

OK, maybe my knowledge is limited but I have met some of the England players at Pennyhill Park, while Jack Clifford of Harlequins is a good friend.

Jack would have loved to have gone to Japan but, like the rest of us, he will be rooting for Eddie Jones’s men. 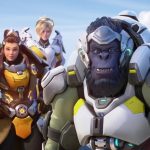