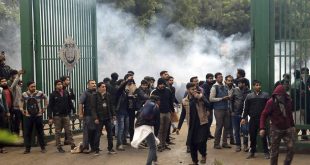 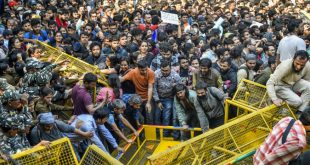 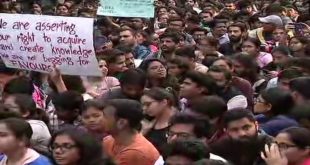 The students also complained that institution’s administration was not cooperating with a top government committee set up to resolve the issue. But the vice-chancellor, M Jagadesh Kumar, said all information was provided to the panel and blamed a section of the students for resorting to coercion instead of negotiations.

Scores of students gathered at the university’s campus and shared testimonies of police brutalities during Monday’s march to Parliament that left many injured and choked traffic on arterial roads.

“My kurta was almost torn and I was lifted and thrown into the bus by four male police officers. Several other women faced this humiliation, ”said student union president Aishe Ghosh, as other students chanted slogans in her support.

The police have repeatedly denied these charges, and a statement released on Monday evening said no personnel resorted to baton-charging the students, or using water cannons or tear gas to disperse the crowd.

A day later, police filed the FIRs against unidentified persons under sections of rioting, being armed with deadly weapons, assault and violating prohibitory orders. Police said they are in process of identifying people who allegedly provoked the crowd into violence. The JNU students said the FIRs were a tactic to intimidate the protesters.

Ghosh also said the JNU administration didn’t meet the three-member committee appointed by the ministry of human resource development (MHRD ). “They are not talking to us, nor a government-appointed panel,” she said.

Education secretary R Subrahmanyam confirmed the registrar Pramod Kumar and vice-chancellor M Jagadesh Kumar did not attend a meeting called on Monday despite being invited.

He added that 12 of the 13 deans of various schools in JNU met the committee, comprising former chairperson of University Grants Commission (UGC) VS Chauhan, All India Council for Technical Education (AICTE) chairperson Anil Sahasrabudhe, and UGC secretary Rajnish Jain.

In an interview to HT, Jagadesh Kumar defended himself and said the deans were involved in reaching out to the students. “Whatever information they [the committee] need, we are providing it. All our deans went and met them, ”he said, adding that he hoped the students would understand the rationale behind the hike in hostel charges.

The proposed fee hike and violence during Monday’s protest also came up in Parliament on Tuesday with Opposition members disrupting proceedings and seeking to corner the government over the issue.

The current crisis began on October 30, when students called a strike against the administration’s move to increase hostel fees, which, in some cases, meant that a pupil would be paying 30 times the current amount.

The students say that the financial burden would be crushing for aspirants from marginalized communities while the university argues that earlier hostel fees of Rs 10 and Rs 20 were too low and needed to be increased. The VC also pointed out that below-poverty-line students would need to pay half the amount.

On Wednesday morning, 46 student representatives from JNU are scheduled to meet the committee to discuss restoration of normal functioning of the university.

Senior police officers said the students will be escorted in a bus up to the MHRD and will be brought back in the same bus. Police will be deployed in large numbers to stave off the possibility of any protests.

The Left-controlled students’ union has agreed to work with the committee but the Rashtriya Swayamsevak Sangh-affiliated Akhil Bharatiya Vidyarthi Parishad (ABVP), which had earlier backed Leftist student outfits, withdrew its support on Tuesday.

The group called for the rejection of the MHRD-appointed committee and demanded the release of funds to the university that will help in rolling back the proposed fee increase.

“Cutting across ideological barriers, ABVP members had attended Monday’s protest and were beaten and detained by the police. However, the Left’s acceptance of MHRD-appointed high-power committee, lack of clear road map for the protest, a constant ideological propaganda, and defacement of Swami Vivekananda’s statue are some of the reasons why we are withdrawing our support, ”said Sujeet Sharma , vice-president of the ABVP JNU unit.

The JNU teachers’ association (JNUTA) also organized a march on campus to condemn the alleged police brutality, which was attended by Kerala Congress MP Hibi Eden.

“We had to express the outrage felt by JNU community peacefully and that is why we organized the march,” said JNUTA secretary Surajit Mazumdar, who alleged he was also thrashed and kicked by the police.

On Monday, the students march to Parliament was intercepted by police near Safdarjung’s Tomb, owing to prohibitory orders. Clashes soon broke out, and students sat on the road in protest for roughly four hours. This was the second big protest by students in eight days. 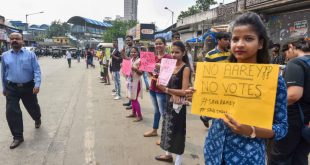 A group of law students of a Noida-based college had on Sunday approached Chief Justice Ranjan Gogoi, seeking the court’s immediate intervention to stop felling of trees in Mumbai. The letter sent to the CJI by Rishav Ranjan on behalf a student delegation on Sunday comes two days after the Bombay High Court refused to…