TheRIPE Network Coordination Center(RIPE NCC), which manages regional distribution of internet addresses for the UK, Europe, Middle East and parts of Central Asia, has confirmed that their final reserve pool of Internet Protocol v4 (IPv4) addresses will completely run out in November 2019.

Strictly speaking the Regional Internet Registry (RIR) started running out of address space in 2012 and began rationing the little they had left. Fast forward a few years and at the start of October 2019 it was confirmed that they only had 1 million IPv4 addresses left in their available pool (out of 4 billion addresses total), “which we expect to run out in November 2019“; these are currently being distributed via smaller prefixes (/ 23 s and or / s 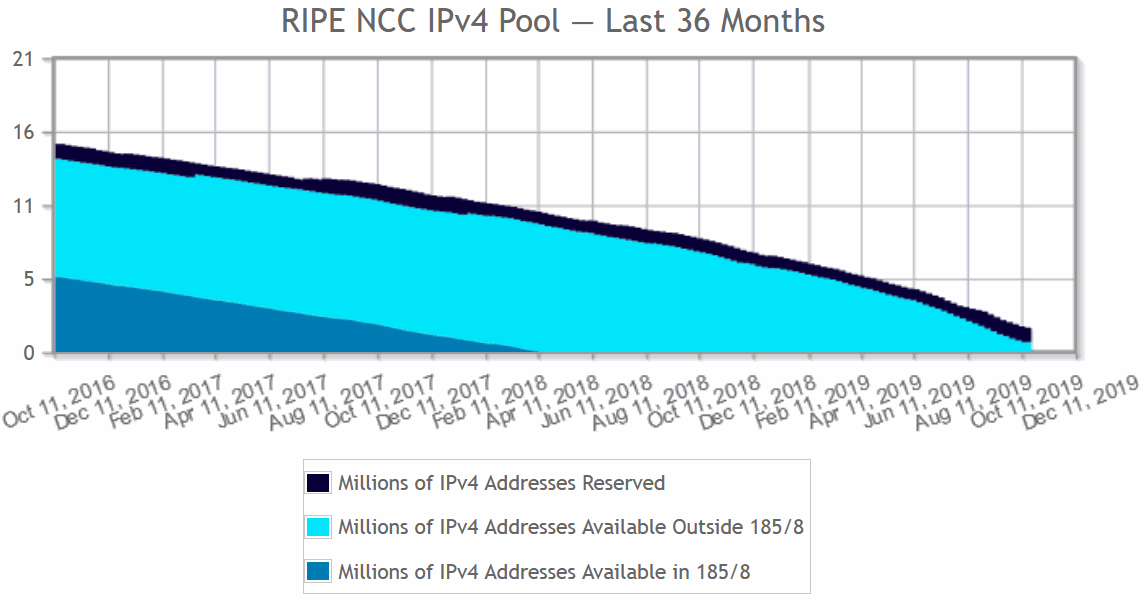 At present theInternet Protocol v4standard, which is part of a seamless technology that helps to connect your computer / devices with the online world (like an ID number for your connection), is still important for a lot of internet-capable hardware and software. Thankfully many ISPs, devices and services have now introduced “newer” IPv6 addresses, although some still have a lot of work to do (egTalkTalk).

Admittedly providers will be using both IPv6 and IPv4’s side-by-side for many years to come because if they were to go completely IPv6 today then a lot of sites, services and devices would run into connectivity problems; many still cannot understand the longer v6 standard (home to about) 340 trillion trillion trillionaddresses).

Indeed when RIPE NCC surveyed 4, 161 network operators and other stakeholders earlier this year, a third ranked IPv4 run-out as among the top-three challenges facing their organization (54% also said they will need more IPv4 addresses within the next 2-3 years .. oh dear).

“On October 2, we announced that we had one million IPv4 addresses left in our available pool, which we expect to run out in November 2019. Any IPv4 addresses we recover after this point will be allocated to new entrants via a waiting list. This will probably be a few hundred thousand addresses – not much compared to the many millions that networks in our region need.

It’s important to note that we have been in a state of IPv4 exhaustion since 2012, when we reached our final allocation from IANA. IPv4 ‘run-out’ has long been anticipated and planned for by the technical community and no one needs to worry about the Internet suddenly breaking. But it does mean that the pressure will continue to build for many networks, necessitating the use of complex and expensive workarounds.

Our advice to network operators is to take stock of their IP resources and to make sure their IPv6 plans are making progress. ”

Some big ISPs still have a large stockpile of IPv4s but others that haven’t deployed IPv6 may have to stretch that out by adopting awkward solutions like internet address sharing (Carrier Grade NAT), which can in some circumstances create problems for internet systems that use unique IP addresses to identify, process and or block user activity.

In other cases we have seen some commercial trading of retired IPv4 address space and this is likely to become more common, at least until the day comes that IPv4 can finally be put to bed.