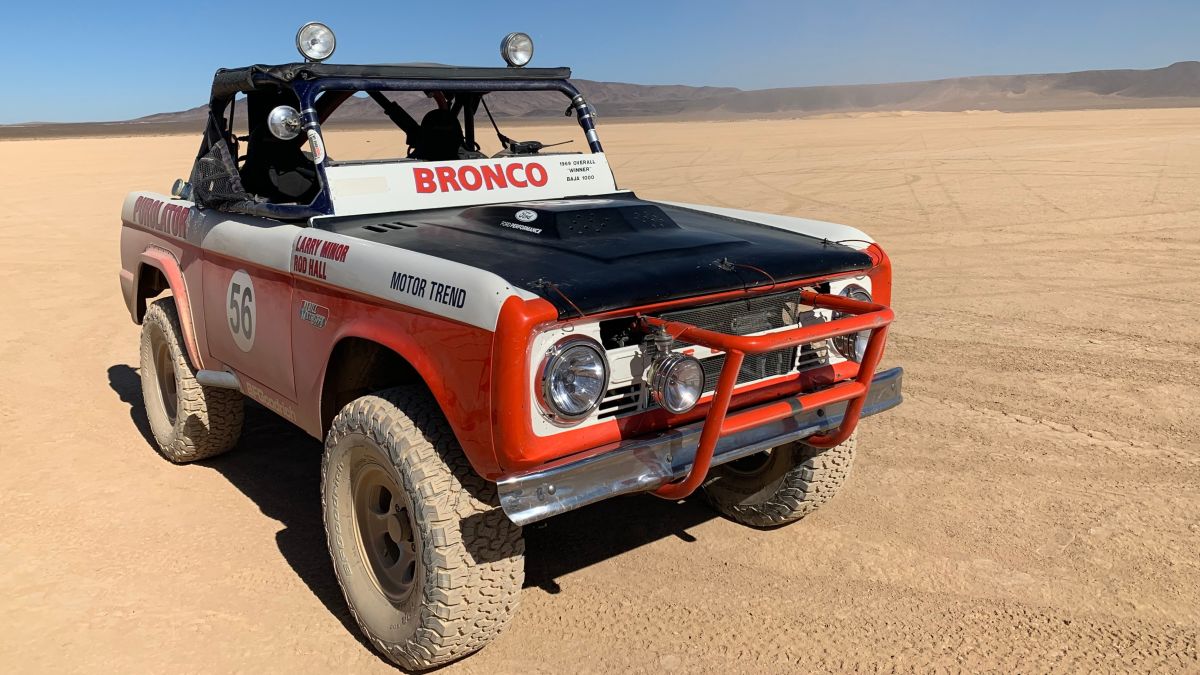 Only one four-wheel-drive vehicle in history has won the Baja 1000 overall, and it’s this one. Driven to the victory by Rod Hall and Larry Minor, the story goes that in those early days of the race there were hardly any roads and certainly no useful maps, making it an incredibly difficult journey. To have done it in this rough-and-tumble rumble buggy must have been incredibly difficult. I got to ride in it for about five miles and it about shook me to pieces!

(Full Disclosure:Ford invited me to Las Vegas to witness the launch ofthe 2020 Bronco R, provided me with transportation, posh lodging, and food.)

“In the early years, Broncos were the thing,”Hall once told the San Diego Tribune, “They were rugged, fast and durable. Broncos put the Baja 1000 on the map. ”

When I first saw this truck enter my field of view from across the desert, it looked like a spec kicking up dust, but as it got closer the silhouette was unmistakable. There is hardly another vehicle like this in the world. I’d know these colors in my sleep. The deep V8 rumble shook me to my core, it was just so lovely to witness. When the Ford folks said I would get an opportunity to ride in the thing, I about fainted.

Rod Hall passed away earlier this year, but he was an absolute legend in off-road motorsports. He participated in the first 50 years of Baja competition, and this truck was his one and only overall victory. Despite having earned over 160 off -road race victories, and more class wins at Baja than anyone else, the overall was a one-and-done exercise. For the desert racing set, riding in this is similar to a ride along in the Gurney / Foyt GT 40. It’s a piece of history.

I am not a small guy, so I had to wait in a line of big auto journos to wait for the biggest race suit. It was still a few sizes too small. The XL helmet didn’t quite have room for my ears.

To get onboard you need a ladder. Step one foot in, fold the other leg in behind you, scoot down into the seat, and try to pull your head in under the roll bar. I needed an extra set of hands to help with pretty much every step of this one. Doing up your own belts in this truck is all but impossible. The seat and belts fit in a way that would not have been strictly race-legal. But once I wedged myself into that truck, I knew I wasn’t going to get out for nothin ’. Full send, please!

When Shelby Hall, Rod’s granddaughter and talented racer in her own right, tapped the starter button on the uncorked Ford V8 under the hood, I was transported back to 1969. We were at the starting line to the most grueling race in North America. Hit it and hold on! Thankfully there was a grab handle on the passenger door, because I absolutely needed it to steady myself.

Even going at what was probably five tenths speed, I could feel every pebble we rolled over. I’ve ridden tractors with more compliant suspension. This wagon needed a little more padding on its buckboard, because I can’t possibly imagine 1000 miles of desert racing aboard this rugged brick with A / T tires.

we didn’t even hit anything particularly taxing as off-road trails go. For most of the run we were scooting across wide open flats. Only for about a mile did we run down a hard-packed two-track at just above walking pace. I was a can of semi-gloss interior and this Bronco was the Rockwood Pneumatic shaker.

But, jarring as it may have been, I had the world’s largest smile stuck on my gob for the entire run and for about an hour after I got out of the truck.

Once the desert runs were complete, I spent some time walking around the truck, scoping out some of the details. The truck has been restored and still races semi-regularly, so I’m sure there are things that have changed since the late 1960 s, but judging by the austerity of the cockpit, probably not much.

A great detail of the truck was this vintage Stewart Warner speedo mounted directly at the transmission right behind the shift lever. In the day it would have been no problem to keep an occasional eye on, but today a HANS device is going to restrict your movement too much to even glance.

Then there was the roof mounted spot lamps, which are mounted to a hinged bar which can point them up and down with a big handle in the cockpit.

This handle can adjust the spot lamps higher, lower, or straight down to see something inside the vehicle if needs be. Why not?

The exhaust of the truck is a no-nonsense straight pipe on either side. I could feel each pulse of the right bank thumping its way out just inches from my right ham hock.

Things were simple in the 1960 s, as you just used what you had. This mirror is infinitely adjustable, thanks to its simple screw strap mounting. And it’s not like you use the mirror much in desert racing anyway. Genius.

An spare alternator belt and power steering belt reside in the back of the truck, along with a shovel which was probably new in 1969, a first aid kit, and a spare tire.

The suspension looks like it’s had some help in the form of some more modern shocks, but not r eally new tech. It’s about as advanced as 1969 tech can be fifty years later , however.

I’m not usually enthused about ride-alongs, but it isn’t every day you get an opportunity to ride along in a legendary off-roader with a great wheel-person. I won’t be forgetting this one any time soon.

I have so much more respect for Hall and Minor racing this pig to the win. Allegedly they blew a headgasket early in the race and had to periodically stop to top up on water, but that’s probably just an excuse to get out and stretch every once in a while. 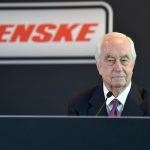