Video: Why did Sultan Haitham of Oman refuse to shake hands with Sheikh Mohamed Bin Zayed? 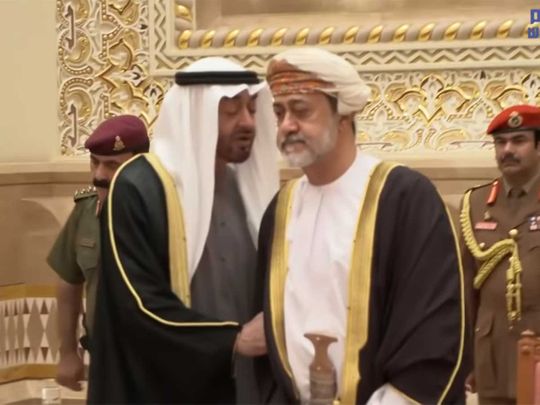 Why did Sultan Haitham refuse to shake Sheikh Mohamed’s hand?

This scenario raised a lot of questions, especially among haters of GCC unity.

The Gulf region is steeped in tradition. And there’s one thing those haters don’t know: Omani custom implies that the host honouring his guest puts his hand back as a sign that he refuses to shake his hand — until he sees him to the door.

That’s what Sultan Haitham did with Sheikh Mohamed Bin Zayed, when the latter bid goodbye following a visit on Sunday.

Numerous world leaders and heads of state descended upon Muscat, Oman’s capital, on Sunday, following the death of the well-respected Sultan Qaboos on Friday night.

Another video went out showing the late Sultan Qaboos refusing to shake the late Sheikh Zayed’s hand until he showed him off to the plane — a proof of generational Omani hospitality when honoring their guests.

The post Video: Why did Sultan Haitham of Oman refuse to shake hands with Sheikh Mohamed Bin Zayed? appeared first on The Wealth Land.