Google: Santa is off the coast of Argentia and has delivered nearly 6 billion gifts.

NORAD: Santa is over Eastern Canada and has delivered nearly 5 billion gifts.

Norad Santa is working the west coast of Australia, Google santa has finished Australia and is now in Indonesia.

According toThe Washington Post, the NORAD tracking system, which is run by the North American Aerospace Defense Command, uses satellites, radar, jet fighters, apps, social media accounts, and volunteers to track Santa’s location. However, it’s not entirely clear how or why Santa determines the route he takes.

This year portals for NORAD include Alexa, OnStar, Twitter, Facebook, Instagram, and 3-D apps that integrate geospatial and satellite-positioning technology with high-resolution graphics that display the actual positions of the stars, sun, and moon and the shadows they cast at any point in Santa’s journey,According to the Associated Press. It takes dozens of tech firms – including (interestingly enough) Google, Microsoft, Hewlett Packard, and Bing Maps – to deliver the immersive effect for global Santa trackers, with some million visits to the website alone last year, according to the AP.

While the NORAD tracker shows Santa traveling over a detailed globe-esque setting, the Google tracker takes a more 2-D approach. Google’s version also features many Christmas-themed games to keep children (and, sure, adults) entertained as Father Christmas makes his journey.

Psst! Did you know, Santa’s journey lasts hours ?! ”aGoogle webpagereads. “He makes his first stop just after 11 PM local time in far eastern Russia, when it’s 5 AM in New York and 11 AM in Paris. ”

Why do NORAD’s and Google’s Santa trackers show two different paths ? Because one of those is a decoy sled driven by our intern Josh, who draws any possible missile fire away from us.

However, if you find yourself doubtful of either or both of the online trackers, the Post notes: “You can always look up at the night sky to see if you can spot Santa and his reindeer yourself.” 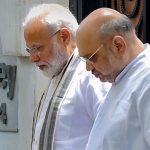