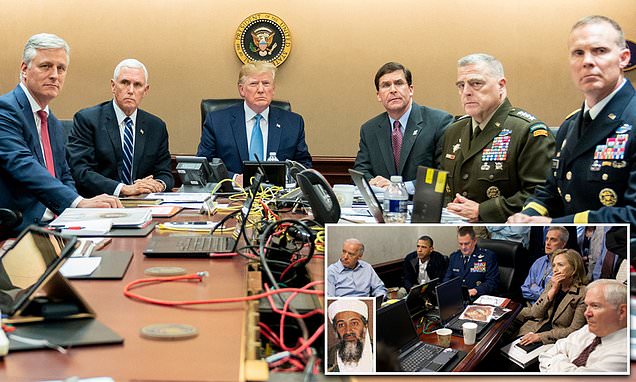 ‘Osama Bin Laden was big, but this is the biggest there is’: Donald Trump boasts that the strike on ISIS leader Abu Bakr al-Baghdadi eclipses Barack Obama’s hit on the 9 / 11 mastermind as the White House releases photo from the Situation Room

PresidentDonald Trumphas boasted that the military raid that led to the death of Islamic State leader Abu Bakr al-Baghdadi is a bigger triumph than the Obama administration’s strike against notorious al-Qaeda leader Osama bin Laden .

On Sunday, Trump announced the strike against the shadowyISISleader where he was cornered by US Special Ops forces in his hideout in northwestSyriaand denoted his suicide vest, killing himself and three of his children.

‘Bin Laden was a big thing, but this is the biggest there is. This is the worst ever, ‘Trump victoriously said on Sunday.

‘Osama bin Laden was big, but Osama bin Laden became big with the World Trade Center. This is a man who built a whole, as he would like to call it, a country, a caliphate, ‘he added.

On Sunday Trump announced the strike against the shadowy ISIS leader Abu Bakr al-Baghdadi where he cornered by US Special Ops forces in his hideout in northwest Syria and denoted his suicide vest, killing himself and three of his children

The president couldn’t help but draw comparison to his administration’s military strike with that of Barack Obama in 2011.

The killing of bin Laden was lauded as one of the great successes of Obama’s time in office as the terrorist leader was the founder of Al-Qaeda and the mastermind of the September 11 terror attacks that killed nearly 3, 000 people.

Bin Laden was killed in a Navy SEALs operation where agents raided Laden’s compound in Abbottabad, Pakistan on May 2, 2011.

In his speech Trump pointed out that bin Laden wasn’t known to the world until 9 / 11, and claimed the killing of Al-Baghdadi was a bigger target because he was the man behind the Islamic caliphate.

president couldn’t help but draw comparison to his administration’s military strike with Barack Obama’s hit on al-Qaeda leader Osama bin Laden (above) in 2011, claiming the death of al-Baghdadi was a bigger triumph

This Situation Room photo shows then President Barack Obama alongside VP Joe Biden and Secretary of State Hillary Clinton during the raid of notorious al-Qaeda leader and terrorist Osama bin Laden’s lair in Abbottabad, Pakistan on May 2, 2011

On Sunday the Trump administration released a photo from inside the situation room where the president appeared stone-faced and looked directly into the camera.

Trump faced criticism for drawing comparison to the Obama administration.

‘Trump claiming killing Baghdadi was “bigger” than killing bin Laden shows how petty and vile Trump is. He will use any moment he can to tell his base that he’s better than the dreaded black President they all hated, ‘one Twitter user noted.

‘Trump boasting that killing Baghdadi was a much bigger accomplishment than killing Osama bin Laden just shows how Trump has so much jealousy and contempt for our nation’s first black President, whom he will never measure up to in a million years, ‘another Twitter user added.

‘I refuse to listen to him. His Obsession with #PresidentObama is pretty sick. He’s in a contest with himself, ‘another chimed in.

Trump also faced criticism for his Situation Room photo where looked square into the camera.

Some accused him of trying to recreate a moving Situation Room photo like that of the bin Laden strike, in which Obama, then Vice President Joe Biden and Secretary of State Hillary Clinton watch the strike unfold on a screen with grave expressions on their faces. 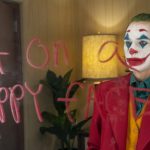 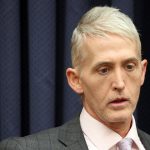