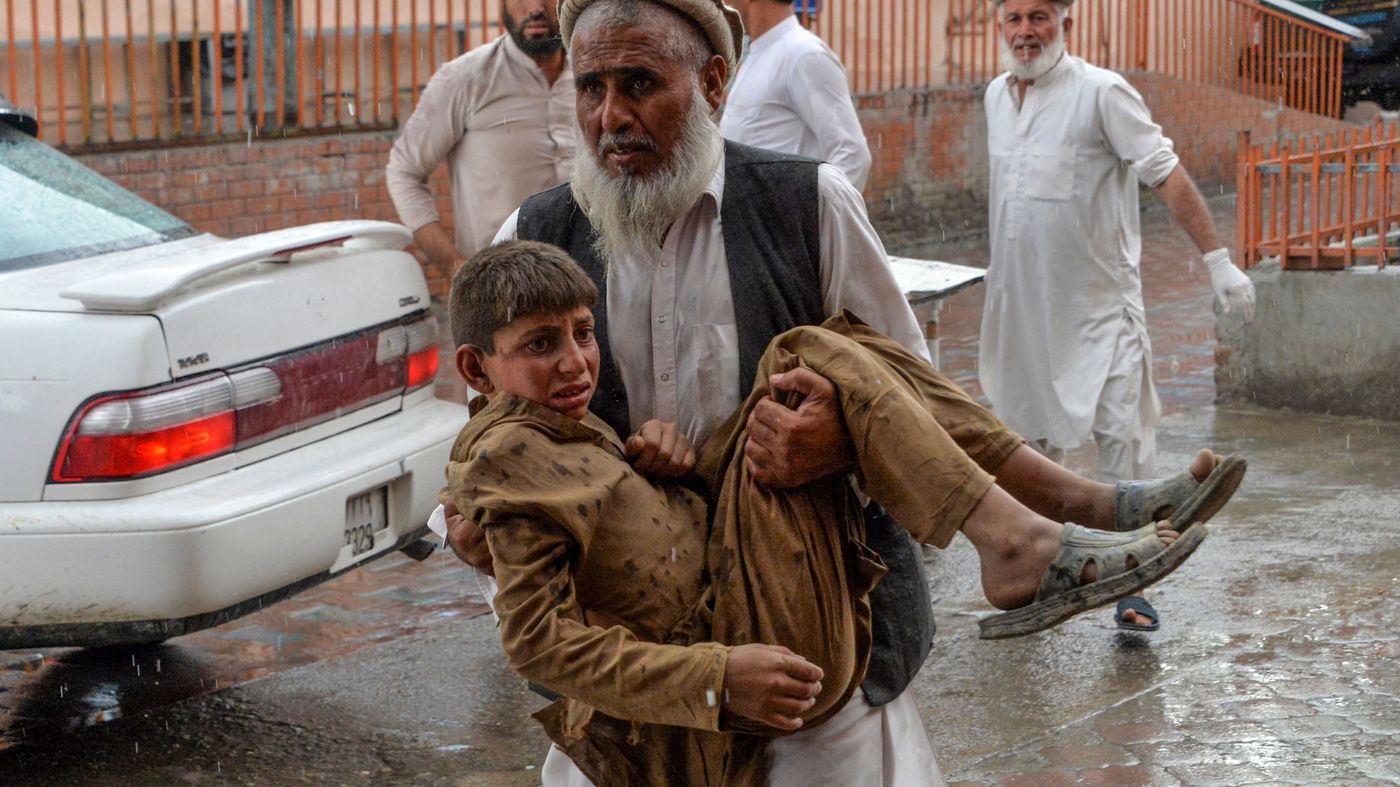 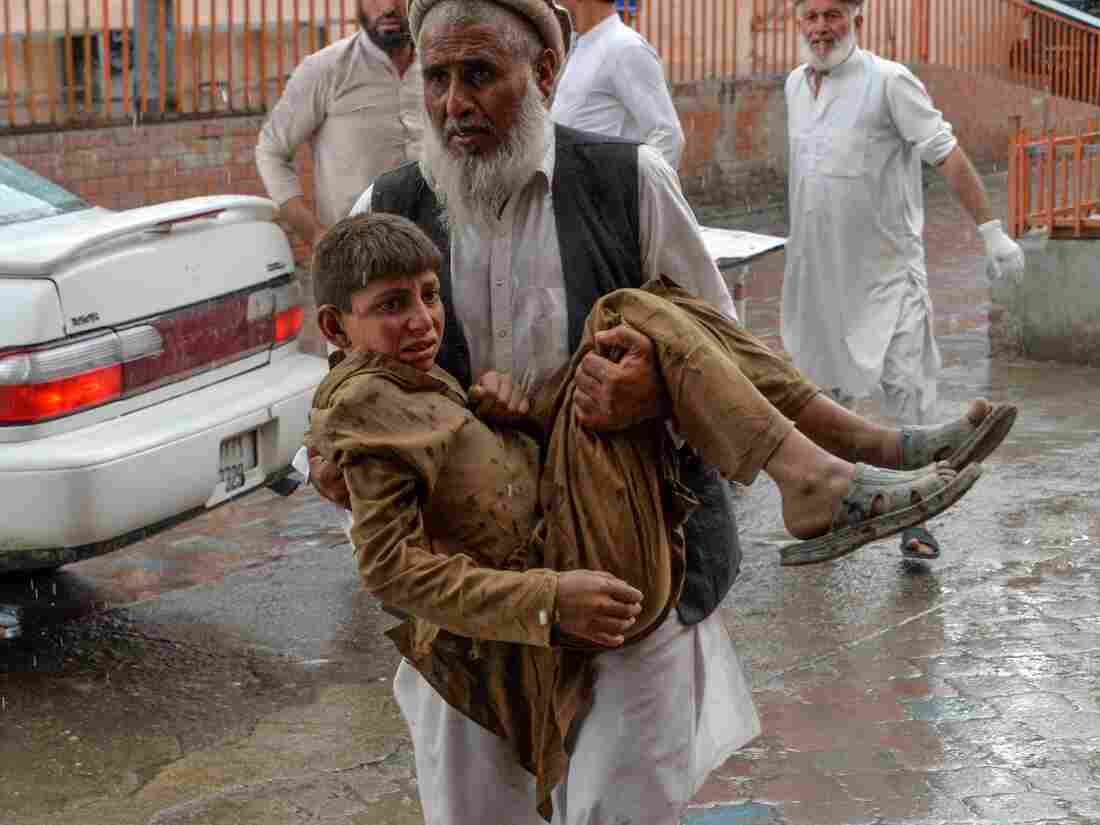 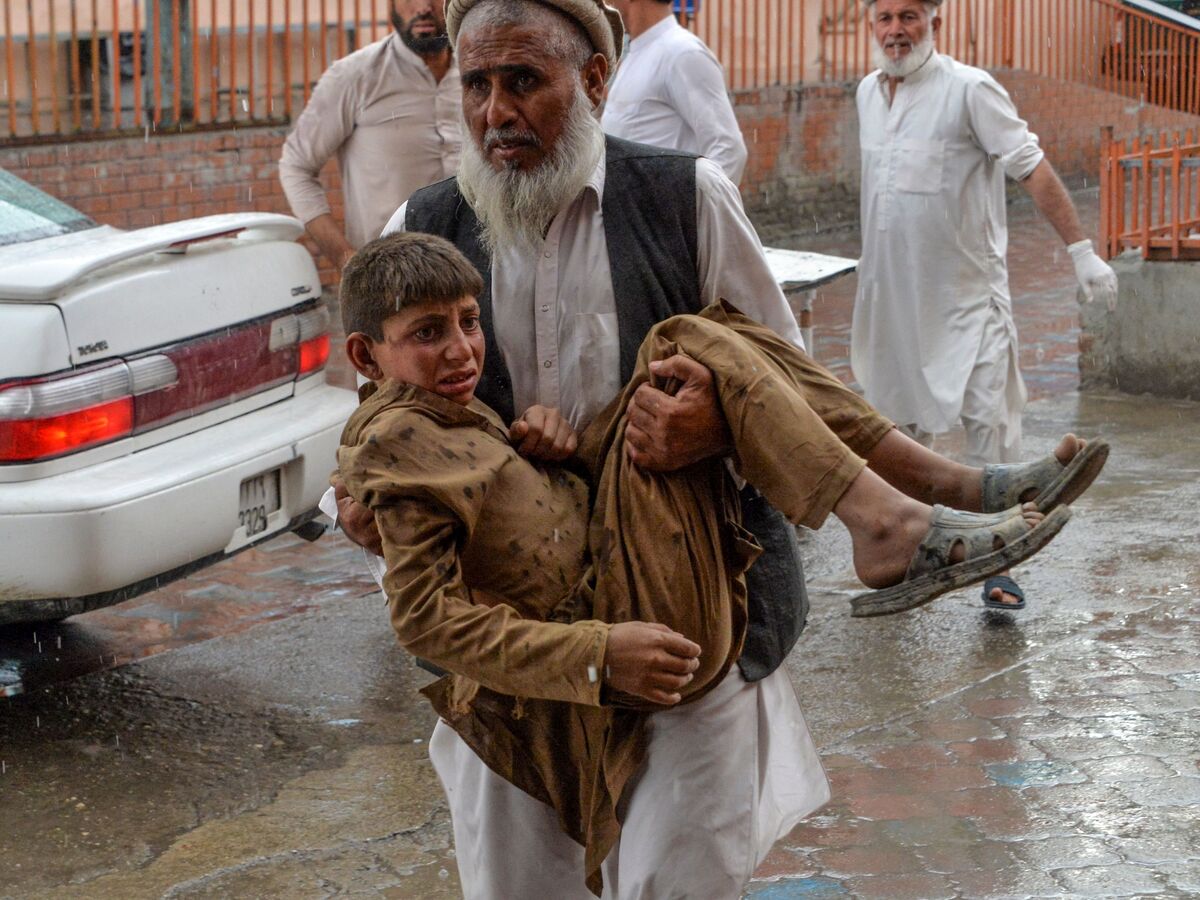 A volunteer carries an injured youth to a hospital after an explosion that killed at least 62 people in the Haska Mina district of Nangarhar province Friday.

Two blasts devastated a mosque in eastern Afghanistan during Friday prayers, killing at least 62 people and wounding dozens more, according to the local government in Nangarhar province

” The spokesman for the provincial governor said the blasts caused the roof of the mosque to collapse on top of worshippers who had gathered for Friday prayers in the Haska Mena district, “NPR’s Diaa Hadid reports from Islamabad, Pakistan. “It’s the most serious militant attack against civilians in weeks. ISIS has attacked Shiite places of worship in the past – but it wasn’t immediately clear why this mosque was targeted.”

President Ashraf Ghani condemned the attack through his spokesman, Sediq Sediqqi. Despite reports of the Taliban’s denial of involvement, Sediqqi called out the Taliban, sayingvia Twitter, “The Taliban and their partners heinous crimes continue to target civilians in time of worship.”

U.N. Secretary-General António Guterres “strongly condemns” the bombing, in a statement issued by a spokesman. That message adds, “Those responsible for this attack must be held accountable.”

The mosque attack comes one day after the United Nations issued an alarming report saying Afghanistan has seen an “unprecedented number of civilian casualties” in the past three months.

July was the country bloodiest month of the past decade, as civilian casualties rose to a tragic level that hasn’t been seen since the U.N. Assistance Mission in Afghanistan began systematically documenting the toll of violence in 2009.

The report also revealed other troubling trends. UNAMA reported that “41 per cent of all civilian casualties in Afghanistan were women and children “from January through September.

And after starting the year with lower levels of civilian casualties compared with 2018, Afghanistan saw deadly violence ramp up as it approached its national election in late September. The results of that vote have not yet been revealed.

As UNAMA released its report, Tadamichi Yamamoto, the secretary-general’s special representative for Afghanistan, urged all sides to avoid harming civilians. He also said it’s further proof that the country desperately needs peace talks that can produce a cease-fire.

“Civilian casualties are totally unacceptable,” Yamamoto said, “especially in the context of the widespread recognition that there can be no military solution to the conflict in Afghanistan. “ 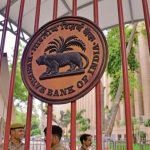