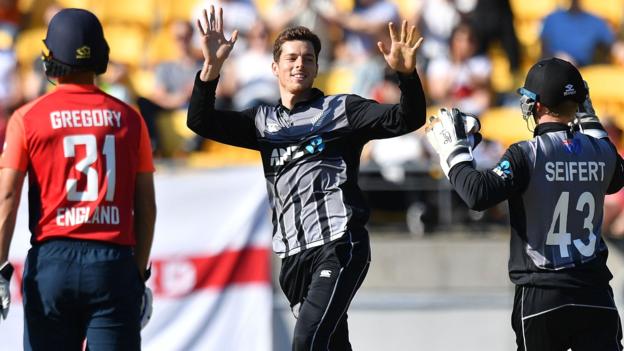 New Zealand beat England by 21 runs to level the Twenty 20 series at 1-1 in Wellington.

The third game of the five-match series is in Nelson at 01: 00 GMT on Tuesday.

England, who haverested several first-choice players,r estricted the Black Caps to what felt like a below-par total, despite dropping five catches, after winning the toss.

Although the pitch had more pace than the one in the series opener in Christchurch and the square boundaries were short, it never felt like England were in control of the chase.

Mahmood, bowling in the powerplay and death overs, finished with 1 – 46 from four overs.

Having conceded 15 from his first over, he fought back well in his second by having Tim Seifert caught behind attempting to ramp.

Mahmood’s final two overs, the 17 th and 19 th of the innings, went for 11 and 15 respectively, although he regularly found the block hole.

Fellow seamer Pat Brown, who took 1 – 33 on debut in the series opener, conceded 32 from two overs.

After not bowling or batting in the first game, Lewis Gregory struck with his first ball in international cricket as he nipped one back to bowl the dangerous Colin de Grandhomme, who made 28 from 12 balls .

While not new to international cricket, it was only Sam Curran’s second T 20 international appearance and he was again impressive in taking 2 – 22.

England will be disappointed with the quality of their fielding, however. Three of the five dropped catches were fairly routine, with James Vince spilling two simple chances and an extremely tough one.

Guptill and Neesham fire with the bat

Guptill, who made two from seven balls in the first T 20, showed glimpses that he was finding rhythm again during his 28 – ball innings.

Strong down the ground and through the on side, he gave New Zealand’s innings impetus at the top of the order, something that was missing on Friday.

All-rounder Neesham had not featured in a T 20 international since January 2017, but his impressive 50 – over World Cup this summer – when he scored 232 runs and took 15 wickets – earned him a recall.

Based on Sunday’s display, New Zealand have to find a way to get him into their side regularly.

Particularly strong on the leg side, left-handed Neesham also played one gorgeous inside-out shot over extra-cover off Mahmood that demonstrated his undeniable quality.

His contribution was integral to the Kiwis posting a target that proved comfortably beyond England.

‘It’s important to make mistakes’ – what they said

England captain Eoin Morgan:“We were poor with the bat and in the field. We dropped a number of catches, although that probably didn’t cost us the game. Our batting cost us the game – it was a beautiful wicket to bat on.

“We were in the game for a long time and considering we were way off the pace that’s encouraging with a young inexperienced side.

“A lot of things can happen between now and the next game. Our mindset is important. It’s important to make mistakes. The important part is learning from them. “

New Zealand captain Tim Southee:“It was a better performance in all three areas. We knew England would go hard till the end and we saw how deep they bat with Chris Jordan.

“We executed things a little bit better. This is a different size ground and so is Nelson again on Tuesday. There’s always subtle changes to grounds and then your plans.

“We’re looking to continue to improve, in all three areas. You can never really play the perfect game but it’s about the brand of cricket we want to play. “

Man of the match Mitchell Santner:“It’s nice to get a few poles. It was more of a complete performance today.

“We talked about being up a little bit more in the field. When they’re backing the bowlers up it makes it that As a bowling group, it’s a tough ground, so we had to adapt our plans. “

England bowler Steven Finn on BBC Test Match Special:“It was a chaseable target but to lose five wickets in the first 10 overs is a pretty hard place to come back from. England were always one wicket behind.

“Putting down easy chances, and misfields, is a window into how the team is really getting on. New Zealand, on the other hand, were clinical. “ 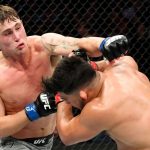