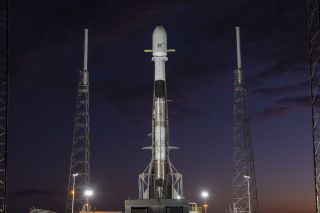 The private spaceflight companySpaceX will launch (Starlink internet satellites) to join its growing megaconstellation in orbit today (Nov. 11) and you can watch it live online.

A SpaceX Falcon 9 rocket will launch the Starlink mission from Space Launch Complex 40 at the Cape Canaveral Air Force Station in Florida. Liftoff is scheduled for 9: 56 am EST ( (GMT).

You canwatch SpaceX’s Starlink launch webcast hereand on the Space.com homepage, courtesy of SpaceX, beginning at about 9: 41 am EST ( (GMT). You can alsowatch the launch directly from SpaceX here.

This isSpaceX’s second Starlink launch of the year. The mission will also mark the first time SpaceX has flown a Falcon 9 first-stage booster for the fourth time, as well as reused a rocket payload fairing (the nose cone that protects a satellite during launch).

SpaceX’s Starlink projectaims to build a massive constellation of broadband internet satellites to provide constant high-speed internet access to users around the world.

“Enabled by a constellation of low Earth orbit satellites, Starlink will provide fast, reliable internet to populations with little or no connectivity, including those in rural communities and places where existing services are too expensive or unreliable, “the companywrote in its Starlink mission description.

Last month, SpaceX President Gwynne Shotwell told reporters at the 70 th International Astronautical Congress in Washington, DC thatStarlink is expected to begin commercial service in 2020. SpaceX CEO and founderElon Muskhas said the company will need at least 400 Starlink satellites in orbit to offer “minor” broadband coverage, with up to 800 needed for “medium “coverage.

In the mission description for today’s launch, SpaceX states that Starlink will begin commercial internet services after just six launches (with about 360 satellites in orbit) by offering broadband coverage to users “in parts of the US and Canada.”

The company would then grow its services with more launches, “rapidly expanding to global coverage of the populated world after 24 launches, “according to SpaceX’s mission description. That would put a base level Starlink constellation at 1, 400 Satellites.

SpaceX initially aimed to launch up to 12, 000 Starlink satellites for global internet coverage. But the company is eyeing plans toboost that number by another 30, 000 satellites.

When the first 60 Starlink satellites launched in May, there were clearly visible in the night sky, thrilling some observers and disappointing some scientists worried aboutwhat such a massive satellite constellation could mean for astronomical observationsand space debris concerns.

SpaceX representatives have said the company has taken steps to ensure that its satellites can be deorbited if they’re not working properly.

“Additionally, components of each satellite are 100% demisable and will quickly burn up in Earth’s atmosphere at the end of their life cycle — a measure that exceeds all current safety standards, “SpaceX wrote.

In fact, one of the 60 Starlink satellites launching today may already have a glitch. SpaceX is studying the satellite to be sure.

“Watching 1 sat that may not orbit raise ; if not, 100% of its components will quickly burn up in Earth’s atmosphere, “SpaceX wrote in a Twitter update Sunday(Nov. 10).

If SpaceX is unable to launch its new Starlink mission today, the company has a backup launch opportunity on Tuesday, Nov. 12, at 9: 34 am EST ( (GMT).